We only had a few hours at New Forest Farm, and I quickly realized it would take a lot longer than that to really begin to comprehend everything that is going on. My husband and I were mostly looking for inspiration, and we found it. Starting at the cider room/pole barn, we met Jen, Mark’s wife, and Weston Lombard of Solid Ground Farm, in Athens, OH.

Thankfully, we had purchased Mark’s book, Restoration Agriculture, and been reading it for a while before the tour. Otherwise, we would have had no idea what we were seeing. Things are so much different on the ground than they are from the air! From the aerial shots in Mark’s book you can really see the pattern layouts, while on the ground you sometimes feel like you’re just walking through any other old forest or pasture. Not so, the elements of the system are purposefully and thoughtfully planned and executed.

Another aspect that surprised me was the swales. I have never seen one in person, only on video, so we had walked by dozens, and I didn’t even know it until Mark pointed out and told us the swales were there. On a light slope, they are much smaller and more unobtrusive than I had imagined, especially once planted out with trees, and the pasture has recovered. I honestly couldn’t tell they were there. During a rain event it probably would have been different.

Agro-tourism: Mark has planted several circular formations of trees that he will eventually join into one large tree, Winnie-the-Pooh-style, and shape out a large hollow reading room as a future agro-tourism attraction. There is also a hazelnut maze where middle-schoolers love to run about.

Camping: We could have camped at the farm for a nominal fee but realized we were ill-prepared and off-schedule. The family was surprised we were only staying such a short time and made sure to tell the rest of the group they were welcome to stay longer and camp out; they just needed to forage for food and otherwise be able to fend for themselves. [There was an outhouse for campers’ use.]

Interns: We didn’t get to spend much time with the interns, but they have been coming and going for years now and several new possibilities were there during the tour. The ones we did meet were very friendly and involved, even making a meal from their own garden and from the farm meat for the large group that had paid for the tour.

Mushroom Forest: Mark took us through the original woods that had pioneered the abandoned corn field and showed us his mushroom inoculation area. He said he gets about a grocery bag of mushrooms a day for long periods, until his kids beg him not to have mushrooms again. At the end of that area is an interesting piece he has fenced off to grow wild. He showed us the rampant undergrowth of what many consider invasives (i.e. multiflora rose; some might call them opportunists) and told us that the Forestry Department (?) had identified that spot on his farm as the largest source of those invasives in the county. He pointed that out to let us see that a managed piece of forest can be healthier and more productive than a piece left to its own devises. 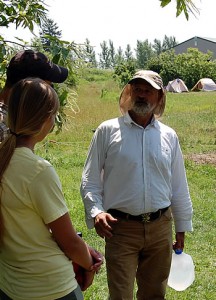 Mr. Shepard mentioned a siting of bears recently and liked how people in the area think, Wow, how neat, take a photo, and then leave the bear alone. While in other more northern states they tend to freak out and shoot it before it kills someone, even though it is up in a tree trying to get away from the people. He said there have also been a couple wildcats (mountain lions) in the county but didn’t seem at all concerned about it. 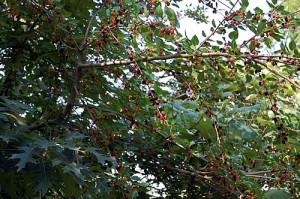 We sampled some small species of cherry, some mulberries, some other berries, all of which I had never tasted. He had already harvested most of the chestnuts, and the ones that were left had been out in the weather and were only good enough for the pigs. 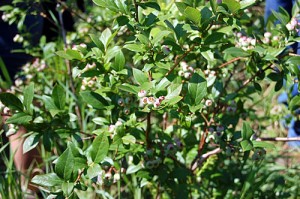 There were apples, pears, and blueberries growing, but he said with a sarcastic sternness that we weren’t allowed to test the blueberries if we found any ripe ones, because he’s super-excited to taste and harvest them himself.

He had a lone pawpaw waiting for a mate. The other hundreds or thousands he has tested all couldn’t hack the Wisconsin winters. Very exciting to Mark, one past intern had also thrown caution to the wind and started Asian pear from seed and then grafted the best ones onto hardy pear stock, and those are doing well.

He showed us one apple tree that has several different varieties grafted on, one has no fruit (loser), one has scab (loser), and one looks beautiful (winner).

He had giant ragweed in the garden that he is letting grow as big as possible before it goes to seed when he will “harvest” it and throw it to the chickens for them to turn into compost, saying you might as well get as much biomass out of it as possible before you end its life.

Surplus rainwater catchment is overflowing into the family’s new hot tub system they created. Mr. Shepard believes in involving his family in the work. His sons helped build their house in years past, the oldest at one-and-a-half and all safety-ed up helped size down concrete blocks. Years later, the younger son in middle school helped pour the concrete floor for their arctic room (mud room).

Comfrey and other plants protected the apple trees from being smothered by grass or riddled with pests and fluffed up the soil (though pigs had recently been through and squashed it down a little). 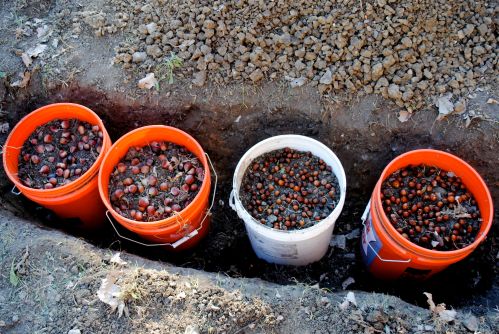 When I asked about his method for starting trees Mark recommended I visit Little House on the Urban Prairie for pictures and details. If starting hundreds of trees is too overwhelming for you or just not your thing, he said it can also be very useful to talk to local nursery men, give them your seed and guarantee them you will purchase the healthy stock.

Vehicles: though hazelnuts are excellent for fuel oil, they are more valuable as a food crop, so Mr. Shepard doesn’t press them for vehicle fuel. In the past, he used to grow sunflowers for his own fuel, but he works out deals now with the rest of his “oil cartel” to get fuel for his all vegetable-oil run vehicles, equipment, and his personal car.

Though we left after a few hours, we had the distinct knowledge that we could glean much more useful understanding if we were able to stay for a few weeks, better yet, for an internship. The Shepards seem to be the kind of people that the longer you hang around them with a good attitude, listening ears, and a willingness to work hard, the more secrets of their years of experience would tumble out. When I told Mark we had come to celebrate our wedding anniversary, he quickly suggested a beautiful scenic route we could take home to enjoy our time a little longer.

One of his sons just as quickly piped up, “Dad, they’ve torn that road all up. It’s not there anymore. I just broke down the other day trying to get through there!” So, we didn’t take the scenic route home, but we had lots to discuss as we droned through the endless corn monoculture on our way back to Kentucky.

All credit for the photos goes to my thoughtful husband. Without him, I would have had nothing but text. The only exception is the nut-soaking photo, which was taken by the author of The Little House on the Urban Prairie blog.